For a large portion of my early life I felt empty, not empty in an aimless and idle sense, but empty in a profoundly barren and godforsaken way.

While my family had their own ideas of what “God” and “spirituality” was, I always had a niggling, disturbing sense that repeating religious scriptures by rote, routinely attending religious lectures and ceremonies, and defending the dignity of dogma wasn’t the answer.

Living such a life, I felt no raw, deep or powerful unity with the Divine, I experienced no breathtaking, electrifying mystical experiences with Infinity. The only feelings I received from dry Deities, orthodox ceremonies and theoretically proposed heavens and hells was that arid, lifeless feeling of being shut up in a stuffy building too long full of nauseously “righteous” people.

As I eventually descended into the depths of a spiritual awakening and subsequent Dark Night of the Soul, I arrived at a life-changing realization:

This way of life I had been born into was centered around rigid dogma. What I was seeking for was a path to experiencing the Divine that you could feel.

I was trying to experience spirituality.

As I slowly made it through these dim and confusing years of the Dark Night of the Soul, I began to read more into the world’s long and colorful history of religions, spiritualities, and spiritual experiences. One such way of life that I felt particularly drawn to stemmed from my own Celtic roots: Ancient Druidism and Neo-Druidism.

As I read more into this obscure path, I realized that it perfectly defined what “experiential spirituality” was.

Druidism was said to be the religion or spirituality of the Celtic people who descended from Britain, Ireland and Gaul (Western Europe). Administered by priests and priestesses known as “Druids”, there exist today very few remnants of such ancient practices. The earliest known mention of Druidism comes from Julius Caesar in his Commentari de Bello Gallico in 50 BC, however, no artifacts exist that can be directly linked to ancient Druidism. This may be because most Druid teachings were spoken by word of mouth, rather than physically recorded.

In fact, as Druid John Michael Greer in his book “The Druidry Handbook“, comments:

All the surviving texts written about the Druids when they still existed add up to a total of ten pages or so in English translation.

Even so, this didn’t stop the revival of Druidism, or Neo-Druidism, which gained momentum again in the 18th and 19th centuries.

Although there are many critics of Druidism in regards to its vague historical roots, as Greer points out:

… the historical roots of a tradition don’t affect it’s spiritual validity … Druidry’s relevance depends on the gifts it has to offer here and now.

How to Deeply Feel Your Spirituality

Perhaps one of the most unique and defining features of Druidism is its refusal to espouse any one rigid belief system, as well as its emphasis on present moment, nature-orientated spirituality. These are the lessons Druidism has taught me. I hope they can benefit you as well:

As Greer points out:

Modern Druids learn from ancient teachings, the developing tradition of modern Druidry itself and the ever-changing lessons of the living Earth. They embrace an experiential spirituality and forsake rigid belief systems for disciplines of inner development and personal contact with the realms of nature and spirit.

Any religion or spirituality that is based on creating separation between people by defining who is “good/truthful” and “bad/untruthful”, is in essence counterproductive to experiencing love, unity and divinity. When you drop the need to be right and to be the more “saintly person”, you open your mind to feeling and experiencing your spirituality, rather than carrying around the egotistical agenda of proving to others a point, and trying to “covert” them to “your side”.

2. Faith is antithetical to experience. Spirituality is an experience.

While faith is necessary in some instances (e.g. faith that life will open opportunities to you), it is not an essential component of spirituality. You don’t need to meekly have faith that Divinity exists, you can experience this Divinity and your inextricable link to it within you.

As a primarily nature-based spirituality, Druidism shows us that connection can be experienced all the time in nature; in sitting among the trees and meditating, in walking by streams of water and letting your stream of consciousness flow with it.

3. You don’t need to be a member of any organization or group to experience spirituality.

Experiential spirituality can thrive in perfect solitude. As Greer points out:

Becoming a Druid doesn’t require membership in an organisation, initiation rituals, or grandiose titles. It requires only reverence for the living Earth and the practice of a nature-centered spirituality and way of life. These can be done in perfect solitude.

4. To deeply feel your spirituality, you should consider making it.

This is important. Creating your own spirituality, your own rituals, your own experiences rather than relying on something else to provide that for you, endows you with a sense of responsibility and ownership for your own well-being. As Greer comments:

… to a great extent, a spirituality that works is one that is made rather than simply found.

This is not to say that other established paths are unprofitable, they are. However, in my own experience, a spirituality that is made is just as powerful as one found. At this present time for example, I consider my spirituality to be an intricate patchwork of philosophies, psychology, eastern religion, and mystic texts – something I unified, and something which immensely fulfills me.

Modern Druidism emphasizes the need to simplify and declutter your external life in order to make room for an inwardly rich one. It is undeniable that in our materialistic culture we have lost touch with experiencing spirituality. This is mostly due to the constant cycle of work, buy, consume, work, buy, consume, that we get lost in.

For this reason, voluntary simplicity is a path emphasized by the Druid tradition to create greater wholeness, happiness and unity in our lives. As Greer highlights:

… people in the developed world have cluttered their lives with so many possessions and surrendered so much of their time to buying, maintaining, and paying for them that there’s no room left for spirituality, community, relationships, personal development, or simple happiness. [Modern Druids] propose replacing the rat race of endless consumption with a life that’s outwardly simple and inwardly rich, and have evolved useful tools for sorting out the difference between needs and wants, getting off the treadmill of consumption for its own sake, and moving toward a less cluttered lifestyle.

6. Develop a balance of going both within and without yourself.

While learning from the external world is important for spiritual growth, so too is going within ourselves. Unfortunately, this is all too often avoided or shunned by many religions. Fortunately, Druidism is one of many paths that encourages the need for inner work.

Greer provides one good example of “nature awareness” and finding that balance between the internal and external world:

Three practices make up the nature awareness phase of the Earth Path: stillness, focus, and study. Stillness requires that you slow down to nature’s pace. At least once a week, go to a place full of nonhuman living things, find a place to sit, and spend at least ten minutes sitting still and noticing everything around you. Relax your body, and turn your attention away from the chatter of thoughts and worries that usually fills your mind. Sit still, watch, listen, and feel.

Although obscure in many aspects, both ancient and modern interpretations of Druidism can help us regain that connection to the Divine, assisting us in rekindling an experiential form of spirituality that we thirst for.

Whether you take away a single idea, or an entire forest of inspiration from this article, I hope you have a new path to explore on your spiritual journey.

If you would like to learn more about Druidism, I recommend Greer’s “Druidry Handbook” as a place to start. 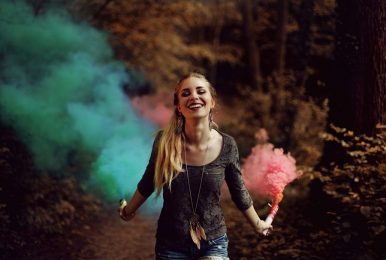