Jesus was once asked when the kingdom of God would come.

The kingdom of God, Jesus answered, is not something people will be able to see and point at, instead, he said:

Jesus spoke a truth that is timeless and universal.  I have read through many religious holy books and spiritual scripts and often they all share the same precept — that life’s greatest treasure, its ultimate truth, resides within us. 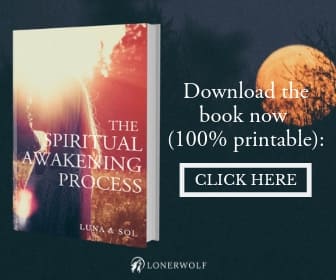 But what about the Kingdom of Hell and the Devil?  Is hell within us?

My experience is that Hell is not a flaming hole under the earth.  Hell is actually a spiritual place of torment that we carry around every day.

The Gates of Sin

Few people know that the word ‘sin’ comes from the Greek word Hamartia (ἁμαρτία), which, when translated actually means “to miss the mark” or “to miss the target“.  This changes the whole modern-day concept of sin.  When we are small, we’re taught that to sin is to be a terrible person.  So many of us carry around the guilt of the mistakes we’ve made, thinking we’re horrid people.

I grew up in a Catholic household and the discovery of the true definition of Sin revolutionized my perception of life entirely. I had been taught sinning was to do something wrong, to be a bad person.  But the true definition means to make a mistake, it means that I wasn’t a bad person (guilt), and I had only done something misguidedly (shame).  Sins were meant to be a guideline to help us go through life in such a way as to cause the least amount of harm possible, to ourselves and others.

Deep down before I discovered this revelation, I only felt constant guilt for being a bad person.  If sin is seen as an act of badness, it makes you feel guilty and dirty.  I couldn’t feel like a religious person at all with this mindset.

In fact, guilt became a barrier to experience any divine feelings of gratitude and love.

If your right eye causes you to sin, gouge it out and throw it away.  It is better for you to lose one part of your body than for your whole body to be thrown into hell. ~ (Matthew 5:29)

If you were to take Jesus’ words literally at face value, he would sound like a ruthless brute.  But Jesus was a loving man, and with this new understanding of sin, you see what he was really trying to say: if one eye is making you perceive the world sinfully, get rid of it.  It’s a metaphor that tries to teach us to become aware of whatever is making us sin and remove it.

Karma is often thought of as an external force that creates justice, that balances the world out.  It teaches us that bad people have bad things happen to them.

The mistake of the ‘sins’ concept is thinking that changing the external acts will change the internal being as well.  Changing the surface of something by making you afraid of it cannot change its core, or the source of the behavior.  To change where it ends (external actions) you have to change where it begins (the way you perceive it).

You also often see people complain about the same mistakes, for example, women complaining that they always end up with the wrong guys that cheat on them or take them for granted.  Repeat offenses are also very common amongst criminals who, according to statistics, re-offend almost 50% of the time (of the ones that are caught).

Why does this happen?  The mystical religion of the Upanishads consider the concept of ‘sin’ as darkness.  They teach that the reason why we sin, the reason why we cause harm to ourselves and others is because we are unaware.  But if you shed some light into your darkness, if you become more alert and start questioning your continuous unconscious habits, then you will stop sinning.

Karma is wrongly confused with the notion of having a fixed destiny.  The truth is that Karma is constantly in the making, and we have an accumulation of tendencies (all the way back to childhood) that can lock us into particular behaviour patterns.  If I’m a criminal, commit crimes and have surrounded myself with other criminals from a young age, I shouldn’t be surprised if something bad happens to me.  Not because I’m a bad person, but because my negative behaviour and perception of life attracts negative forces around me.

If you are alert, if you are mindful of everything that you do, then bad things stop happening as much as they do when you live with unmindfulness.  In fact, you begin to see the true consequences of your ‘sinful’ actions or impulses to both yourself and other people, and you begin to make decisions to avoid doing them.

For instance, giving into ‘sinful’ temptation by seeking quick stimulation by cheating on my partner will have long lasting consequences in the form of guilt and negative emotions.  These will affect my relationship, possibly resulting in its termination and both of our unhappiness.  Instead, with mindfulness, I could become aware of my dissatisfaction, communicate it, and try to create stronger bonds through new activities with my partner to find greater stimulation again.

It’s easy to blame karma for all the bad things that happen to us.  It’s easy to attribute our suffering to external forces that are out of our control.  But these aren’t responsible, in fact, we carry out karma with our lack of mindfulness and awareness.  It’s our actions that cause our mistakes, and our ‘sins’.

The Devil Comes In Many Forms

Aimless television watching, eating fast food instead of preparing your own, playing vacuous games on your smartphone or holding grudges instead of communicating them.  There are many ways we commit sins against ourselves every day.

We all carry a Devil inside, trying to trick us into indulging primitive pleasure impulses (violence, stimulation, sex) or habitual addictive behaviours.  We’ve all experienced this internal conflict, this duality, of Good versus Evil, refraining ourselves from wanting to do something because we know it’s bad.

Hell is a place that is ever present, it exists when you ‘miss the mark’ of being mindful of your ‘sinful’ temptations that harm yourself and others.  Hell is a cycle of endless suffering.  If you’ve ever found yourself inside one of those life cycles where you’ve hit rock bottom, making mistake after mistake, it feels eternal with no way out.

If the Kingdom of Heaven/God is only a mindful action away, then why not try it?  religion‘s only concern should be with your behaviour and personal responsibility, and deep down, isn’t that what religion is all about?  Yet somehow we always focus on other people and their sins.  Preoccupying ourselves with other people’s mistakes is a good way to feel relief by avoiding the focus on our own.

Once you see sin as a transgression to yourself, without the ‘deadly’ religious punishment element, it becomes a very helpful tool to enhance the quality of your life.  Start by asking yourself: is what I’m doing right now harming myself or someone else in some way?  Could I be doing something that would benefit me more?  There’s a reason why Sloth is on that seven sinful mistakes list.

Thinking of ‘sin’ as creating harm against ourselves is much more useful than thinking of it as violating a spiritual ‘code of conduct’ or destined Karma force.  You’ll see the results in this lifetime as well.

Mateo is a spiritual educator, guide, bibliophile, entrepreneur, and co-founder of one of the most influential and widely read spiritual websites on the internet. Born into a family with a history of drug addiction and mental illness, he was taught about the plight of the human condition from a young age. His mission is to help others experience freedom, wholeness, and peace in all stages of life. [Read More]