The spiritual ego is the most dangerous type of ego of all.

If you aren’t mindful, it can wreak total destruction in your life – but not in a violent or aggressive way. Instead, the spiritual ego is disguised under the mask of “good intentions,” “higher vibration,” “awakened perspective” and humble pomposity.

Beware of the spiritual ego. 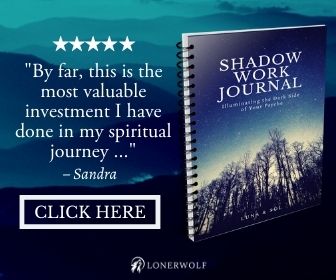 It’s a trap that many of us spiritual seekers can and will, at some point, fall into. And the longer we remain in that spiritual ditch, that stagnant standstill, the more likely we are to develop into a spiritual narcissist.

Indeed, spiritual narcissism is perhaps the most tragic malady to befall humanity of all. We’ll explore why a little later. But first:

What is the Spiritual Ego?

Firstly, let’s touch on the basics. The ego is our sense of self; it is the illusory “I” story we carry around in the world as an evolutionary survival mechanism. Yet the ego is the source of all our suffering and our feeling of being separated from that which we truly are which is boundless, whole, and infinite. We might call this Spirit, God/dess, Life, Oneness, Consciousness, and so on.

So what is the spiritual ego? The spiritual ego builds on top of this fundamental ego that we carry around. It is the ego on crack, the ego on steroids, the ego inflated beyond its usual garden-variety size. Yet the thing is, we don’t realize we’ve developed a spiritual ego until life well and truly starts getting messy.

How Does the Spiritual Ego Develop?

The spiritual ego is a product of spiritual materialism – that is, using spirituality to serve the ego, instead of approaching the spiritual path with the intent on trying to move beyond the ego.

When being a “spiritual person” eclipses all else that a person is, this is the spiritual ego in action. Yes, there are positive benefits to building your identity around spirituality. But there are also some pretty scary consequences that we shouldn’t ignore.

The Development of Spiritual Narcissism

Walking the spiritual path properly is a very subtle process; it is not something to jump into naively. There are numerous sidetracks which lead to a distorted, ego-centered version of spirituality; we can deceive ourselves into thinking we are developing spiritually when instead we are strengthening our egocentricity through spiritual techniques. This fundamental distortion may be referred to as spiritual materialism.

Spiritual narcissism is the very culmination of spiritual egotism: it is the ego that has become so solid, so fixed, so unyielding in the idea of its own spiritual greatness that it is pathological. It is narcissistic.

As we know already, narcissism is a mental disorder where a person has an inflated sense of their own importance (amongst several other hairy issues). The exact same problem applies to spiritual narcissists: they have such unwavering belief in their own awakened perspective, their own “special” spiritual achievements and knowledge, that they cannot connect with (or tolerate) their humanity. Spiritual narcissists cannot tolerate other people either – even though they may fine-tune the external image of being compassionate or wise – others ultimately pose a threat to their delusional grandiosity. 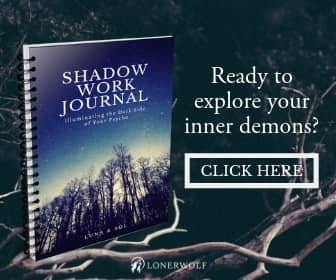 Eventually, we can become so sidetracked, so deluded by the ego that has used spirituality to make itself indestructible, that we are worse off on the spiritual path than when we began.

Examples of the Spiritual Ego

You get the picture.

I’m sure you can think of a few more examples, and you’re welcome to share them in the comments.

15 Signs of the Spiritual Ego

The spiritual ego is so dangerous because it is nearly impenetrable.

People can spend their entire lives (or lifetimes) stuck in the trap of unknowingly misusing spiritual words, ideas, practices, and paths to inflate their egos.

Sadly, the spiritual ego can result in instances of abuse and even murder such as Jonestown, the abuse committed by Bikram Choudhury (founder of Bikram yoga), Swami Rama (Indian yogi), Bhagwan Shree Rajneesh (spiritual teacher), Sogyal Rinpoche, Andrew Cohen, and even Chogyam Trungpa (who coined spiritual materialism), and so on. The cases of spiritual ego are so wide and varied they are impossible to include here.

The reality is that as spiritual beings having a human experience we are imperfect. Hell, I’ve fallen into the spiritual ego numerous times – and it’s not pretty. But the crucial thing is to practice humility, openness, and the willingness to be honest with ourselves – these qualities are the best defense against spiritual egotism and narcissism.

So, without further ado, here are signs of the spiritual ego and spiritual narcissism that you need to look out for (both within yourself and others):

Essentially, those wound up in the woes of spiritual egotism frequently try to reaffirm their spiritual specialness to the world through covert and overt methods. However, more often than not, the spiritual ego is a slippery little devil that is hard to call out or define clearly, simply because we’re so close to it and find ways to justify it.

Why is the Spiritual Ego Dangerous?

Quite simply, the spiritual ego is so dangerous because it is dressed in robes of light. It appears to be awakened, illuminated, wise, and all-loving – and that’s what makes it so difficult to catch.

Furthermore, the spiritual ego makes us feel powerful, even untouchable which is precisely what the ego seeks to achieve. To challenge it challenges the very foundations of our own self-worth and self-image – and that can be positively terrifying. In fact, we can even feel like we’re committing a profane and sacrilegious act calling the spiritual ego out because it’s so inflated and has such a good opinion of itself (a delusion which we have totally bought into).

Not only that, but the spiritual ego is also dangerous because it limits all growth: it is the death of any transformation because to evolve means to go through the cycles of death and rebirth. And if the spiritual ego has “already arrived” there is stasis, there simply cannot be any more growth.

In fact, the deadliest virus on our paths is to believe that “we’ve arrived,” have become “enlightened,” or somehow spiritually superior to others. The ego has not only become narcissistic, but it has developed a full-blown God Complex; the state of believing that it is in actual fact God. But this is not in an egoless, non-dual way: this is pure ego-centrism, the very definition of darkness (or the absence of light).

The more ego-based we are, the further we are from the Light of Consciousness which goes beyond the self. And if residing in the ego equals a disconnection from the Divine, living from a place of ego-centric God Complex goes one step further: it is like living in total darkness – the very definition of hell.

When a person is living in hell, they will harm others. This is basic knowledge that even a child could understand. When there is a total absence of light, there is only darkness – and how can a person see clearly, feel clearly, think clearly, or behave clearly in such a state? The result is suffering, both for the one experiencing the God Complex and those unfortunate souls around him/her.

How to Stop the Spiritual Ego

As I mentioned previously, we need to approach the spiritual path with humility, openness, and the willingness to be honest with ourselves.

A crucial place to start is by practicing a combination of self-love and shadow work – two inner work practices.

We all have a shadow side (i.e., the face of the ego that isn’t presented to the public), and we need to become aware of it in order to prevent issues such as spiritual egotism and narcissism from arising.

If you would like to learn more about shadow work, see our free shadow work guide.

You can start by asking yourself questions such as:

You can also ask trusted friends, loved ones, or spiritual mentors to help point out areas where you might be falling into spiritual delusion. Introspective journaling (see our shadow work journal), is also another way of calling out the spiritual ego.

What are your thoughts about spiritual narcissism and the spiritual ego? I’d love to hear your experiences in the comments below. Also, feel free to suggest any methods that can help people guard against this spiritual trap. 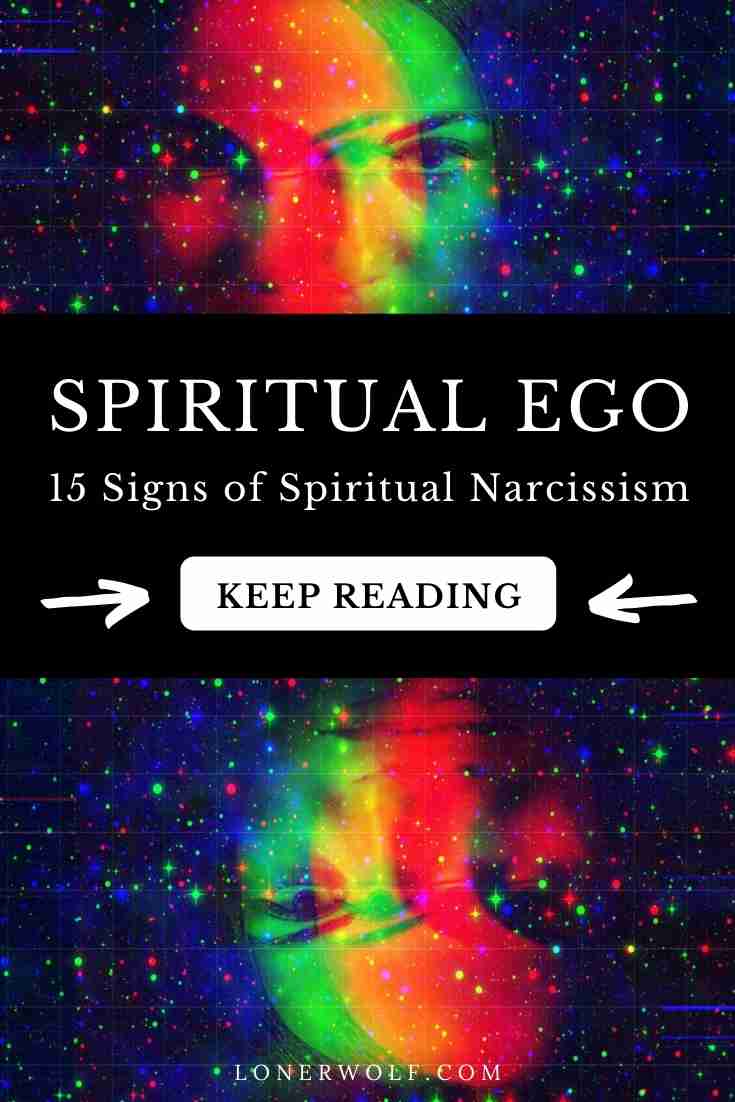 Aletheia is a prolific psychospiritual writer, author, and spiritual mentor whose work has touched the lives of millions worldwide. As a survivor of fundamentalist religious abuse, her mission is to help others find love, strength, and inner light in even the darkest places. She is the author of hundreds of popular articles, as well as numerous books and journals on the topics of Self-Love, Spiritual Awakening, and more. [Read More]