“Altered states of consciousness” sounds like something from a cheesy 80’s sci-fi movie or a trip down the rabbit hole of Alice in Wonderland.

But each and every day you and I enter into altered states of consciousness.

Whenever you get transfixed by a screen (aka. your phone or the TV) and dream at night, you enter into an altered state of consciousness.

However, at some point in life, most of us have a bizarre – or even frightening – experience that we can’t quite explain.

Sometimes, these strange experiences are actually blissful and ecstatic. And other times, these odd undergoings are a mixture of both joy and pain.

Have you ever gone through something that blew your mind and temporarily shattered your reality, but you’ve never really understood why it happened or what it meant?

What you’ve likely experienced was, in the words of mythologist Joseph Campbell, a “Call to Adventure” or call to walk your one and true life path and find the meaning of life.

What is an Altered State of Consciousness?

Altered states of consciousness (ASC), also known as a non-ordinary state of being, occurs when we temporarily access a state of mind that isn’t usually available to us. Altered states can be either deliberately stimulated or may occur randomly and without warning.

Types of Altered States of Consciousness

There are a number of different types of altered states of consciousness out there. Some examples include:

Causes of Altered States of Consciousness

An encounter with unfathomable beauty, terminal illness, or any extreme of human experience might induce a sudden shift in consciousness, a sacred knowing. But perhaps more commonly, states of non-ordinary perception are first entered with practice— meditation, prayer, chant, trance dance—or perhaps with a sacramental entheogen such as peyote, psilocybin mushrooms, or ayahuasca.

Altered states of consciousness can be produced by:

This list isn’t exhaustive, but these causes may give you an idea of what triggered your own altered state of consciousness.

15 Signs You’ve Had an Altered State of Consciousness

As defined by psychologist and shamanic teacher Christa Mackinnon, there are a number of different signs that you’ve experienced an altered state of consciousness.

How many of these signs can you relate to?

Other signs that I’m adding to this list include:

Do you need to have experienced all of these signs to have undergone an altered state of consciousness experience? No. Some of these signs may apply to you, and some won’t. That’s normal and okay.

This list is also not exhaustive, so keep that in mind.

Why Do We Experience Altered States?

Now that you have an expanded understanding of altered states of consciousness, you might be wondering “WHY?”

There are various explanations out there ranging from depressing to mediocre to cosmically “wow!”

For instance, many traditionally-trained psychologists and psychiatrists would assign many types of altered states of consciousness to merely being a form of pathology – a mental illness.

Others explain altered states as neurological misfirings of synapses or chemical imbalances in the brain.

And still, others believe that altered states of consciousness are always and only ever signs that you’ve “entered alternate universes,” “upgraded your DNA,” “cleansed your etheric energy field,” and other such new age explanations.

My stance is that there’s no black or white explanation. Yes, some altered states may be due to trauma and mental illness, and others may be neurological impairments. Perhaps it is possible to communicate with aliens or enter alternate universes.

But overall, it’s my conviction that altered states of consciousness are meaningful and often pivotal points in a person’s life. They possess deep value and are ripe with insight and the possibility for personal transformation. Often, such non-ordinary states set in motion a necessary existential crisis.

In this way, I believe that many altered states are “calls to adventure” to take a closer look at our lives, work through our inner wounds, and reconnect with our souls.

At the core of altered states of consciousness is a move to be more Soul-centered.

Altered States of Consciousness as a Path of Soul Initiation

Most altered states of consciousness throughout history can be found in a religious or spiritual context.

Whether it is the trance-inducing Sufi dancing, the chanting of Hindus, the deep prayer of Christians, the meditative practices of Buddhists, or the sacramental ingestion of entheogens like peyote in Native American ceremonies, altered states have always been valued as sacred.

There are three main reasons why altered states of consciousness have been seen throughout the centuries as sacred:

In the words of depth psychologist Bill Plotkin,

… a conversation with soul is not likely within the defended confines of ordinary consciousness. The conscious self must look at its own psyche from a different perspective, from a unique angle, from a position of altered awareness, like viewing earth from outer space, or returning home after a month in an exotic culture. Most soul-encounter practices induce liminal states of temporary ego dissolution that release us from the usual rules and norms of our personality and culture, opening the way to fresh observations and creative adventures.

Altered states gift us with the ability to temporarily exit the straightjacket of the constricted and conditioned self and access a higher (or deeper) vantage point.

We all have an animating spark of life, a core essence, an authentic Self – and for those of us who are lost and don’t know how to find that inner Center anymore, altered states are the pathway to illumination.

In fact, I’d go so far as to say, in many cases, that the Soul drives us toward or even triggers altered states of consciousness to beckon us “back home” via soul searching – back to our true path.

Why Are Altered States Sometimes Terrifying?

If altered states are so positive and are signs of spiritual awakening, why are they sometimes horrific – even terrifying?

My answer is that altered states are sometimes frightening because they can bring us face-to-face with our mortality, biggest wounds, and greatest fears.

Some altered states, it seems, are the result of a traumatized self (or ego) trying to piece itself back together.

Another reason why altered states may be terrifying – this time in those who are otherwise mentally sound – is that the ego doesn’t feel prepared to access higher realms of consciousness (as can be seen amongst those who have blissful mystical Oneness experiences and the like).

If you’ve ever observed (or been one of those) people who have taken an entheogenic drug, you’ll notice that one’s mental state is everything.

Those who are in a state of fear, mistrust, and resistance to life often end up having “bad trips.” Whereas those who let go, trust, and allow the ego-self to subside, end up having joyous and euphoric experiences.

In essence, one’s mental state is everything when it comes to altered states of consciousness.

How Do I Make the Most of My Altered State Experience?

Going into an altered state is nothing weird. You do it all the time. The question is whether you use the altered state to produce change, and if so, how are you going to use it?

We go into altered states of consciousness every day, but there are some altered states that can’t be ignored. They must be integrated – or transferred into your life in a meaningful way. Without integration, such profound experiences will miss out on unveiling their innate, precious, and rare powers.

Here are some simple ways you can make the most of your altered state of consciousness experience:

Other helpful resources you can explore include the following free guides:

Altered states of consciousness can feel cosmic, horrific, eerie, otherworldly, hyper-real, or peaceful depending on your state of mind and ego receptivity.

But regardless of what triggered them, such intense experiences are powerful forms of Soul initiation – they can be seen as invitations from your deeper Self to awaken and evolve.

When approached consciously, altered states can be used to reorient you to your true calling in life. They can break you out of the fog of lethargy, self-centredness, narrow-mindedness, and sleep-walking that the ego-self is prone to falling into.

As sage and psychoanalyst Carl Jung commented about altered states, “the sacred makes claims on you.” In other words, altered states of consciousness are often experienced without us choosing them.

And sure, while being thrown into the stratosphere of non-ordinary consciousness may be totally scary and confusing, it also plays the role of humbling us – it helps us to see that Life is so much larger than us. Existence is so Mysterious. And consequently, a sense of sacredness can re-enter our domesticated lives.

We can reconnect with our Souls.

Tell me, what kind of altered states of consciousness experience have you had? I’d love to hear about your unique experience below in the comments! 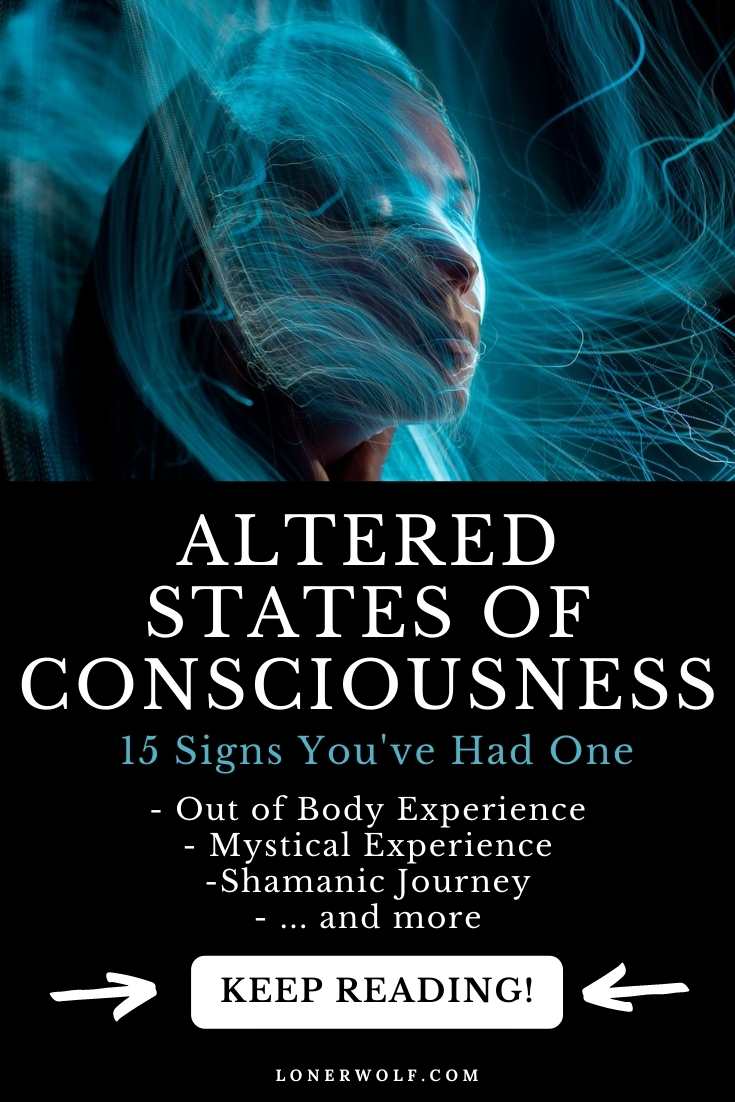