Sex. It’s the driving force of nature, the energetic core of life.

From the pollination of plants to the biological urge to reproduce in animals and humans alike, nearly everything has a sex drive – and that sex drive arises from our libido.

As the essence of all creation, sex is the center of all life; from the birth of a child to the ecstatic conception of a piece of art, all creation is rooted in the libido. 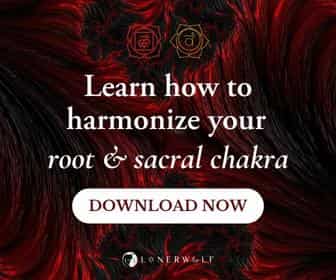 If you have an unwieldy sex drive or are simply interested in channeling this energy in a creative way, keep reading. You might be amazed by what the power of your libido can do!

(✬ By the way, if you need further support channeling your sexual energy, I recommend checking out our Grounding & Cleansing Chakra Bundle – it focuses on the root and sacral chakra which rules the flow and expression of sexual energy in the body.)

What is Sexual Transmutation?

Sexual transmutation is the alchemical practice of channeling and directing your sexual energy into a ‘higher’ purpose. As one of the most powerful energies in existence, our sexual energy can be directed towards achieving goals, manifesting dreams, and experiencing deeper states of consciousness.

Famous examples of people who practice sexual transmutation (either knowingly or unknowingly) include:

Anyone with a sex drive (no matter how big or small) can practice sexual transmutation. This is also a practice that suits anyone of any spiritual or religious persuasion (as long as that religion embraces sex as a natural and healthy experience).

Some of the most commonly noted benefits include:

If you think that I’ve missed out any key benefits, let me know below in the comments!

Ancient cultures have, for thousands of years, recognized the power and force of the libido. While some have condemned and feared it (as the mighty force it is), others have celebrated and channeled it.

Apart from the Tantric and Taoist sexual energy practices, there are countless other references to the hidden powers within sex.  Kabbalah, for instance, sees sexual desire as the deepest spiritual expression one can have.  And in Yogic philosophy, our pure sexual energy is dormant until awakened in its highest form known as “Kundalini.”

Many esoteric groups also practice something called “Sex Magick,” which is connected to psychiatrist Carl Jung’s notion of sexual alchemy (similar to Freud’s sexual sublimation).  In Sex Magick, it is taught that with enough will, we can transform the raw energy of our libidos into the transcendent power of creativity.

Frequent sex has often been perceived, in many religious traditions, to be a kind of distraction. And while there’s absolutely nothing wrong with enjoying regular sex, there’s so much more to the libido then just getting off (orgasming).

Sex, other than being a source of pleasure, can also be channeled into any form of creation – from writing that book you’ve been meaning to pen to mastering the art of intuition. As sexual energy is creative energy, it makes sense to make the most of its innate benefits. Just look at the likes of Immanuel Kant, Lewis Carroll, and even Emily Dickinson – all practitioners of sexual transmutation (in their own way)!

It’s true that after having sex, we feel more relaxed – and this is because the body’s energy and motivation have been temporarily depleted. But imagine what would happen if you used that burst and release of sexual energy toward fulfilling a dream or goal. There are many ways to do this. Visualization is probably the most common method (we’ll explore more practices soon).

There are two sides to the path of sexual transmutation: sexual abstinence and sexual expression, both can create powerful spiritual transformations. What path you decide to walk depends on your libido, character, and personal needs.

Regardless of what path you choose, your sexual energy can be channeled toward feeling closer to the Divine and more in touch with your Soul. Indeed, the moment of orgasm is a holy glimpse into the Divine – it is a moment of no-mind, a moment when you temporarily merge with Oneness and lose your limited ego.

How to Practice Sexual Transmutation

When motivated by sexual desire, we develop a vaster imagination, deeper courage, firmer willpower, more tenacious persistence, and flourishing creativity that we weren’t even aware of.

If the sexual energy within humanity can become so strong that it moves us to hurt others or risk imprisonment to satiate it, imagine what could happen if we harnessed this energy and directed it toward a greater purpose?

Before I delve into how to practice sexual transmutation, I want to put a disclaimer here:

The path of sexual transmutation isn’t about rapidly indulging, denying, running away from, or even overcoming the desire for sex.  It’s about accepting your sexual drive as an innate part of your nature; as the base notes to your higher symphony.

I have seen many who feel as though they should rise “above” their “lower nature” elements, and thus decide to flee from or ignore their sex drive, considering it primitive and even “unspiritual.” Please don’t make this mistake. Sexuality is beautiful. Orgasms are doorways into the Divine. Pleasure is your birthright. Let’s not confine this part of ourselves to the shadow self (either through excessive indulgence or denial).

Ultimately, sexual energy cannot be created or destroyed, it can only be transformed.

Most of the following techniques I have experimented with – and they suit both men and women. Feel free to try one practice per week and only try those you feel comfortable or safe doing.

For a whole week try abstaining from any sexual activity – either alone or with someone else. After the week, explore what you think and how you feel. While some people will benefit immensely from this practice (more energy, happier mood, greater creativity), others will struggle with built-up negative energy (anxiety, frustration, grumpy mood). This experiment will tell you whether the path of sexual abstinence or sexual expression suits you more – both are two sides of sexual transmutation.

If you choose to experiment with the path of sexual abstinence, practice allowing any feelings that arise within you emerge. Try not to judge them, instead, just be an observer. See these feelings as they are, they are natural. Simply observe what these desires and feelings are telling you about yourself. Also, try refraining from labeling them as “sexual energy.” Rather, treat them as a sensation, like when you experience something “hot” or “cold,” and experience them without any expectations of getting rid of them. Some people by simply observing have orgasmic rushes of energy without any physical stimulation.

Tantric edging is the practice of having sex and coming to the very edge of an orgasm, without reaching the point of ejaculation/climax. This is an ancient Tantric practice that helps to increase your energy, focus, and inspiration. Tantric edging also helps to boost your creativity and is great for those who suffer from chronic fatigue or depression.

Visualizing is a simple sexual transmutation technique. The only thing that this practice requires is having a clear intention before engaging in sex.

Think about what you would like to direct your energy toward the most. Perhaps you want to finish that college degree, master a skill you’ve been itching to learn, achieve an important goal, or even have a profound spiritual experience of some kind. Whatever is important to you, carry it with you into sex. (Remember, this must be a realistic goal.)

As you engage in sex and reach the point of orgasm, visualize yourself achieving that dream, goal, or desire. The climax of sexual energy directed toward the image you’ve created in your mind is powerful. In Tibetan mysticism, this is known as creating a thought form or tulpa.

Some people feel uncomfortable doing this practice without telling their partner (it can be perceived as ‘using’ your partner to achieve something that benefits you). So if that is a concern of yours, have a playful conversation and let them know.

A sigil is a symbol that is infused with meaning and intention. This is a practice that is commonly used in Sex Magick or amongst practitioners of Western esotericism. Learn more about sigil magic to create a sigil.

After you learn how to create a sigil, you can then ‘activate’ it (and thereby activate your intention) during sex. At the point of orgasm, focus on your sigil (which you have put nearby somewhere) and then relax. You have now planted a seed within your unconscious mind, fuelled by sexual energy.

Breathwork is the practice of consciously directing your breath. When it comes to sexual transmutation, breathwork can be used to move your libidinal energy throughout your body. This is a particularly effective technique if you suffer from a sacral chakra imbalance (the energetic center of your sexuality).

To practice this technique, breathe in slowly, feeling your sexual energy accumulate within you, then breathe out slowly and feel it dispersing throughout your body. This is a wonderful way of moving your libidinal energy away from your genital area and balancing it throughout your being.

Immerse yourself in a world of illuminating insight, soul-centered wisdom, and crystal-clear guidance inside our Spiritual Awakening Bundle.

You can also visualize your sexual energy moving up through your spine (the energy of kundalini) and moving to your third eye chakra. This is a powerful technique, particularly if you want to channel your sexual energy toward spiritual growth (however, go slowly and be gentle with this practice, it can be powerful!).

By embracing the spiritual power of our sexual energy (and not rejecting it), we can experience greater health, prosperity, growth, creativity, joy, and transformation.

If you are interested in delving more into this topic, you can read my follow-up article on Spiritual Sex .

Have you ever practiced sexual transmutation? If so, what benefits did you experience? Let me know below!